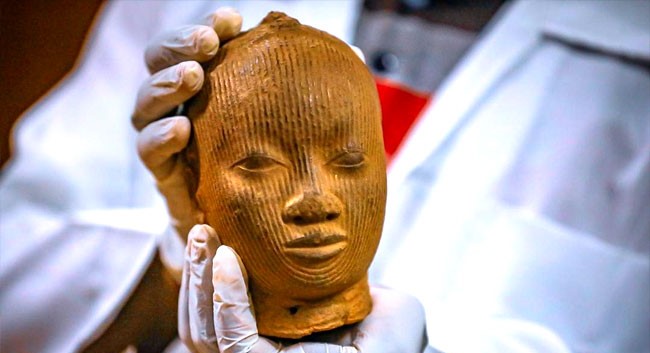 The National Commission for Museums & Monuments has received a treasured repatriated Ife terracotta head from the Kingdom of Netherlands.

The Minister of Information and Culture, Alh. Lai Mohamed took delivery of the artifact at a brief handing over event in his Office.

Netherlands Ambassador to Nigeria, Mr Harry Van Dijk, presented the valuable piece of art to the Minister on behalf of the Government of the European country.

The terracotta head from Ile-Ife in Osun State, a unique and rare artifact, which was illegally exported through the shores of Ghana was intercepted by Dutch Customs at the Schiphol Airport in 2018.

The event was also attended by the Minister of Foreign Affairs, Geoffrey Onyeama, the Director-General of NCMM, Professor Abba Tijani and top officials of both Ministries & the Commission.

The Priceless treasured terracotta head which was said to be about 600 years old was in turn handed over to the NCMM Director-General, Prof. Abba Tijani for proper conservation and safe keep by the Commission.

The Director-General described the return of the treasure as a success story for the Commission, and a dividend of concerted efforts by relevant global stakeholders in the protection of cultural property.

While showering praises on the Government of Netherlands for this singular act of support and consideration, he enjoined other countries in endorsement of the 1970 UNESCO convention on return of illicit cultural property to collaborate further with Nigeria in the drive for repatriation of her cultural property illegally transported and spread across the globe.